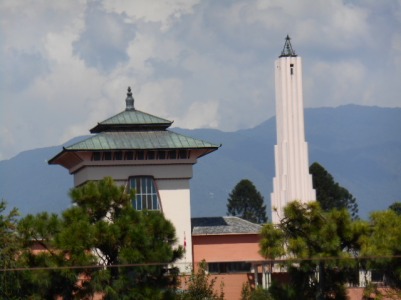 Musings about Friday on Saturday Morning.  Our days in Nepal are winding down.  Yesterday, Amy and I had breakfast at Top of the World Coffee, and I commented on how we have established a rhythm to our days.  It’s so enjoyable.  As I sit in the early morning, putting this blog together, William is already up and brought me a cup of coffee – how spoiled am I?!  Kyung and Amy are still nestled in, gathering energy for a new day.  Kyung is leaving today for a weekend work gig, down by Chitwan, so we have a bit of time this morning to share some sightseeing, creating a few more precious memories.  Last night was our last evening together in Nepal.  Kyung, William, Amy and I celebrated by having supper at Vesper Cafe & Restaurant.  My wine friends in Minnesota would love this place.  Italian food and wine – beautiful presentation and scrumptious.  We were able to go into the wine show room … 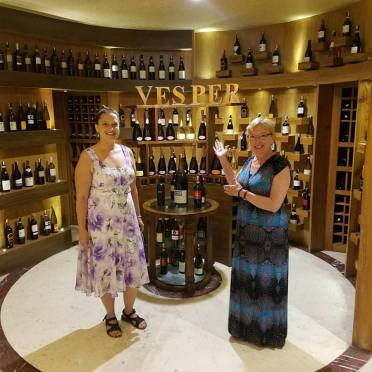 Earlier in the day, we decided to take a cab – at a ‘chok’ (intersection), across from our coffee shop, and head for Narayanhity Royal Palace, home to Nepal’s kings for over a century.  It was converted into a public museum, in 2008, signifying the country’s transition from a monarchy to a republic.

The holiday is over!  Oh my goodness, the traffic was in full swing!  Our masks were back on – Kathmandu is one of the highest ranking cities (5th) with air pollution.  Arriving at the palace, the line for admission to the palace was long, but we got through quickly.  We were required to leave everything but our billfolds and water in a locked, locker.  Everyone had to go through a body search and walk through a scan before actually entering the grounds.  No photos allowed.  Armed guards were at various posts throughout the property.

It’s a beautiful palace, and the history and various rooms were displayed with descriptions also in English.  Beyond the palace is the house where the Nepalese Royal Massacre occurred on June 1, 2001 – the story goes – after a dinner party held at the palace, Prince Dipendra shot his parents, brother, sister and several other members of his family before turning the gun on himself. In total 10 people died and five were wounded – he was unhappy with his father not allowing him to marry the woman he loved, because she wasn’t in the ‘social class’ he was.  Horribly sad.  It was good to be out on the grounds after that … wandering (under watchful eyes) various paths, viewing ponds and sculptures.

We decided on a late lunch before heading back.  On a top floor outdoor restaurant, I was able to take a picture of the palace – 1st photo of blog.  I’m also including the roof-top of another business.  Solar power is used everywhere here.  Much more-so than the USA.  Even the street lights (only in parts of the city), use solar.  So impressed.  Readily available resource, hm?  Put to very good use …. 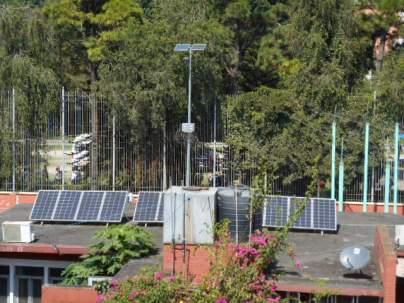 We caught a cab back ‘home’ – (I’m getting pretty good at handling pricing and crossing streets with crazy traffic ; ))  It was a great adventure.  Also time to take a break – we’re getting better at pacing ourselves, too, realizing going at top speed, leaves one too exhausted to do more.  We went for a trek later in the afternoon, stretching ourselves with neighborhood boundaries.  I have always felt safe here.  It’s a nice place to BE.